This is the last of three mixed media collage pieces I created during my time at Blueberry View Artist Retreat. I spent about three days working on this piece off & on. The first day was spent selecting thin papers with various designs for the background. Oftentimes this portion of the collage doesn’t end up showing in the final image but I seem to take a long while selecting them, just in case.

Once those were adhered to the canvas I moved on to adding more layers.

Eventually came some darker layers and pieces, followed by some squares of white, textured paper.

Once those were dry I got out my charcoal and went to town, outlining and adding dark lines throughout the entire piece. Thin washes of acrylic ink were used in the sections that were created by the charcoal lines. 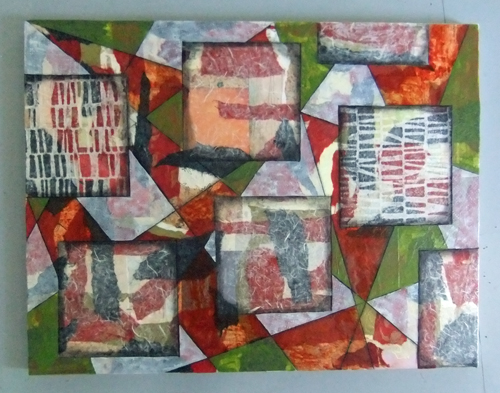 After the ink was added then the black tattoo-like designs were drawn in with a black gel pen in the square sections where the white paper had been added that didn’t have a preprinted design. There are also a large number of very thin lines drawn through the background, I had a hard time stopping once I started adding them! Since they are hard to see in these photos perhaps you should plan a studio visit to see this piece in person. 🙂

This piece is the second of three new mixed media collages that I created while on my retreat last month. It is also the one that I struggled with the most, at least until a creative lightning bolt hit me during an afternoon nap. I literally leapt off the couch and dashed to the studio before the idea disappeared!

It’s beginning were inspired by my goal of having more words & text in my work so I literally covered the canvas with just that!

A bit of texture and design were make with the acrylic gel to give it some added detail. At that point I wasn’t sure what else it needed so I started with some color, a nice warm brown.

That’s where I got stuck! I just could not picture where it was going so knowing the next step was impossible. So it sat for several days and, evidently, simmered in my creative percolator. My sleep schedule (when left to my own devices) includes a nice afternoon nap for an hour or so and as I was drifting off one afternoon a thought popped in my mind. Talking in circles! I already had the words, all I needed was the circles. 🙂 From that point on it was a piece of cake!

Adding ribbons of paper in different colors, drawing the circular design with charcoal, painting the highlights, I had it finished by the time I went to bed that evening. Although you can’t tell it from these small images there are still places in the image where the text shows through.

I think it really helped to have it out and in my view while I was pondering what to do with it. I’ve got several pieces in the studio I need to pull out and ponder on a bit – perhaps I’ll get hit with another creative lightning bolt when I least expect it!

Featuring another new mixed media wall sculpture! This is the first wall sculpture I completed during my time at Blueberry View Artist Retreat. The circular piece in the background is an old 33 1/3 LP, covered in aluminum and colored with inks. Added to that are some cut-out shapes, also covered in aluminum, that were colored ink a similar color scheme.

The bright blue portion of the sculpture was painted with acrylic on a wood cut-out that was cut with a scroll saw. It was one piece from a large “stash” of cut-outs I had with me.  After the main portion was assembled it was just a matter of choosing some smaller accent pieces and arrange them. One of my goals during the retreat was to include more words, texts, quotes, etc. in my artwork. When I found the “believe” piece in one of my boxes of “treasures” it just seemed to fit perfectly. The final piece I added was the twisted aluminum wire. I like the motion it adds to the composition.

It must have been the beautiful flowers and gardens outside the window of the studio that inspired this piece! A little different than my normal bold abstracts this collage piece came together almost of it’s own will! So quickly in fact that the only other image I have of it is the five blank canvases. 🙂 It was only here in my studio a few days before it was swept away to it’s new home. It’s nice when someone else gets excited about your work and just HAS to have it! And it’s fun to think of all the places my art pieces are going to. 🙂

During my recent artist retreat I took a few hours to wander the lovely property and gardens and take photos. As everything around home seems to be dry, brown and struggling for life I thought some beautifully tended and well watered blooms might be fun to share! I hope you enjoy them! 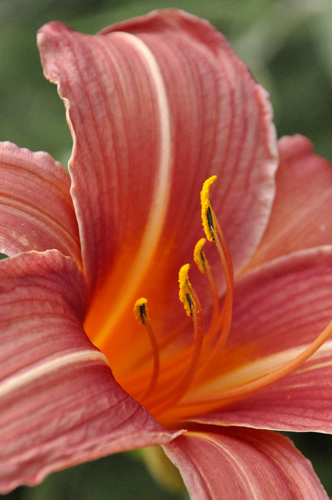 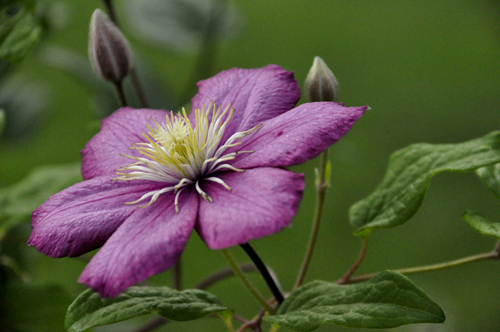 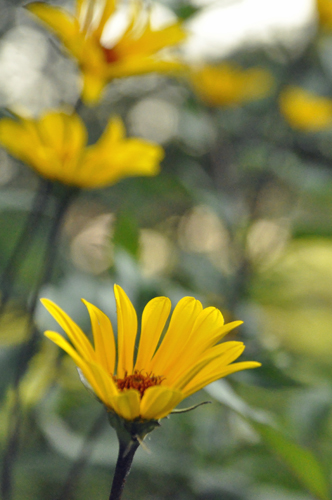 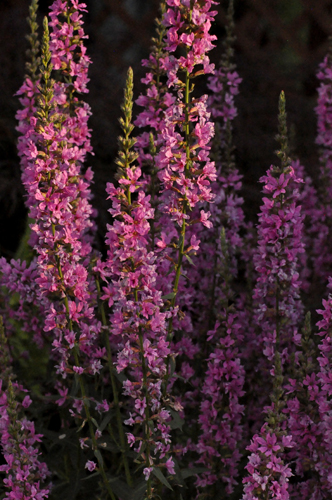 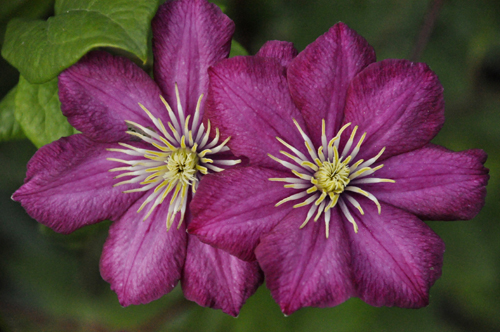 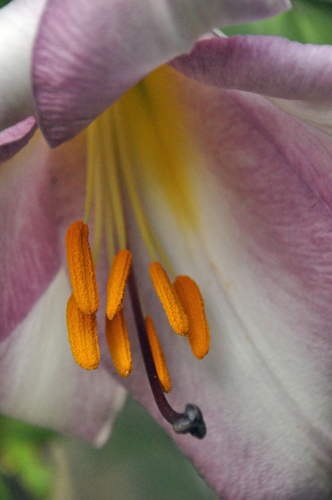 Today I’m back to showing art created during my time at Blueberry View Artist Retreat! This is one of my favorite pieces from my time there. Since I didn’t have time to buy any new, large canvases before I headed to Michigan I ended up taking a short trip to a nearby town and bought this one as a treat. My intention was to work on it a bit everyday, adding the layers and building it up over my stay until it was finished. As it turned out I had finished it by the end of the next day! Sometimes it just works like that, and I wasn’t going to argue with myself about slowing down when it just flowed so easily. Of course that prompted another trip out for an additional canvas, but that is another blog post altogether. Instead of giving you a lot of chatter I am going to give you a lot of images of the progress!

This piece just went to ArtSplash Gallery in Carmel, Indiana for the month of August, so if you’d like to get to acquainted with it up close & personal be sure to visit the gallery soon!

During my recent stay at Blueberry View Artist Retreat I was able to create several new artworks, including six of the “mini art” pieces I’ve been making over the past few years. Before I began assembling much of the art I spent time just making the smaller pieces that would be used as part of the artwork. Something that I hadn’t done before was to use ink to color small pieces of glass. I had fun trying different color combinations and came up with a nice selection of pieces to work with:

I also made more aluminum pieces that would eventually be covered in ink too. One of my goals for this retreat time was to play with letters, words, quotes, etc. and so I brought my collection of metal typesetting pieces.

I used some of them to stamp letters & symbols into the aluminum prior to coloring it. I took several images of this stage of the process, thinking I can use the images in some digital art next time I have time to play with Photoshop!

Here are a couple images of some pieces after they’ve been colored with the ink:

Of course eventually I did begin assembling the artwork from all these parts & pieces, the first of which (mini art #71) is shown at the top of the page. I also had some spares left that came home to my studio with me – a nice beginning point for future creations! Look for images of the other new minis in upcoming posts, along with several other new pieces.

I had a wonderful experience staying at the Blueberry View Artist Retreat in Riverside, Michigan the past two weeks! I posted a few images and information about my visit while I was there but, since I purposely “unplugged” and didn’t bring a computer, posting from my cell phone made it a challenge. And, honestly, I was too busy making art to spend a lot of my time writing blog posts about it! The next several posts will be about my stay and the art that was created during that time – 20 new pieces in all! The smallest is assembled on a 4×4″ canvas, the largest on a 36×48″ canvas. Today I am sharing with you some images I took of the artwork hung on the studio walls prior to the reception on Thursday, July 14th.

In addition to these images I wanted to share with you an article, written by Terri Gordon, about Blueberry View: Click here to Read! The rest of the posts will focus more on individual pieces and the steps taken to create them, be looking for the first one in a day or two!

Shew. Done. The last couple days were fun adding all the details...and the weather was perfect. Today was just plain hot but the final tweeks are done and it's got some UV coating on it for protection. Tomorrow it goes back to Noblesville and from there it will be installed at either Noblesville Riverwalk or Federal Hill Commons...not sure which place mine will be just yet. If you haven't looked at the @whiteriveralliance page yet you should! I love how differently each canoe was envisioned and created! Can't wait to see them on display. ;)
Some of these fish are giving off a serious Dr. Suess vibe!
Today the flowers and insects are going on the crazy canoe!
Emergency tree addition over the little pond. Couldn't add the tree frogs without a tree!!