If you’ve noticed the lack of blog post the last week or so it’s because our family is in the middle of wedding preparations for my youngest daughter’s wedding this coming Saturday! In addition to the normal planning we are having the wedding on our property so there has been busyness outdoors getting things ready too. The tent will arrive in a few days and then I know after that things will just go by in a blur. We’ve been brainstorming for months on decorations and special touches, I’m sure after it’s all over I’ll post some images to share. In case you were curious, NO! I am not doing the wedding photography! Oh, I’ll have my cameras around but I am letting someone else be in charge. 🙂

Today I thought I’d share with you some images of the wedding invitations that I (and my crew of helpers!) created for the special day! The outside folder began as 12×12 sheets of scrapbook paper. I had a large stash and just let the bride and the groom’s mother go through the stack and pick out designs they liked.  I knew someday my paper buying obsession would pay off! Once they’d been selected then they were folded to create little folders which the actual invites would be placed in. 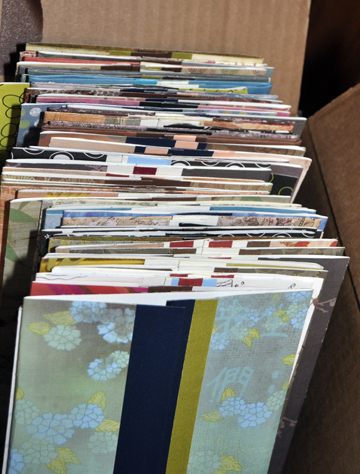 We’ve had a couple of wedding prep parties so at the first one that crew tackled getting all the papers folded. During the next week or so I would sit in the evenings while we watched television and add the decorative colored tapes to the front edge to give them a finished look as well as to secure the pocket area created inside.

As that was progressing I had also been working on the design & layout of the invites, RSVP card and info sheet that would be placed inside. I hired a calligrapher friend to do the lettering of their names and she also added a fancy “&” symbol. That ended up being the background portion of the design! After scanning her black & white work into the computer then I spent a few sessions arranging and fine tuning the placement, color, size and look of the rest of the invite. Here is the final result: 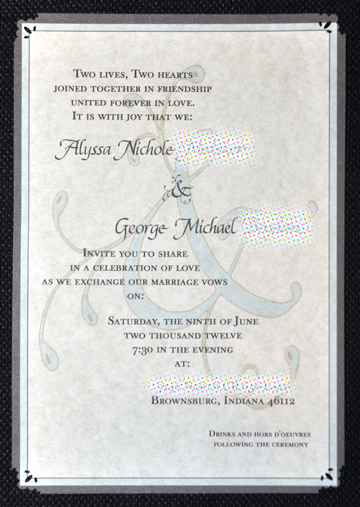 This and the reply card both fit on one sheet of parchment paper for printing. After they were cut apart the corners of the invite were punched to make the decorative edge. I also designed an insert with information about the wedding, including a map and directions for guests.

At the next “prep party” those three items were all placed into the finished folders, tied with twine and placed in the pre-addressed envelopes. 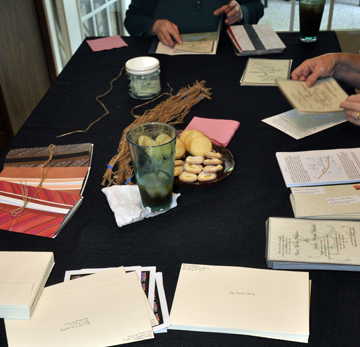 As you can tell we also enjoyed some tea, lemonade and cookies as we worked. 🙂 Got to keep my helpers happy. Here is a selection of the finished ones before they made their way out in the mail. 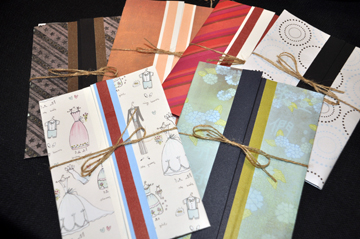 It was fun knowing that each person was going to get a unique invite by designing them this way. The only thing we hadn’t planned on was that they exceeded the one-stamp postage weight and we had to add extra postage. Ooops!

I will try to get another post together yet this week but guarantee nothing….if not I’ll return next week.